Diamond cuts through the ages: Part 2 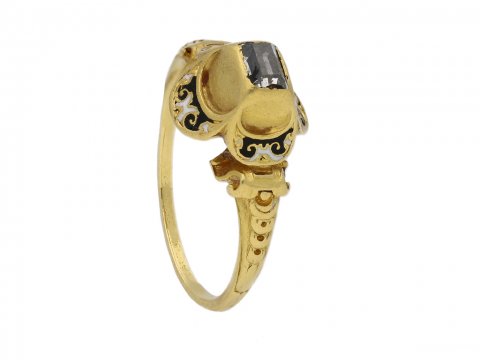 Uncut diamonds appeared in Europe as early as the 4th century BC, when Alexander the Great’s expeditions opened up the trade links between the East and West. It was believed that diamonds were sacred and would protect the wearer from negative energy, and for a long time it was believed that tampering with and cutting this majestic crystal would destroy its talismanic ‘powers’.

The first example of a ‘cut’ diamond dates back to the 13th century. This cut utilised the rough shape of the octahedral crystal with the points ground down and polished to have flat tops; a cut known as the ‘table cut’. While rare, examples of this cut can be seen in Medieval and Renaissance jewellery, a time where diamonds were reserved exclusively for royalty and nobility.

Developments in the 16th century led to a shift away from simply polishing natural crystals to genuine faceting. With many of the better diamond specimens being siphoned off before getting to Europe, the material supplied would be irregularly shaped and often of poor quality, so cutters began turning thin bits of rough into what we now know as ‘rose cuts’. Flat-bottomed with a crown covered in triangular-shaped facets, this cut was thought to resemble a rose petal, with the facets said to resemble the petals unfolding in a rose bud. This cut allows light to diffuse through and is a way to show off the exceptional adamantine lustre found only on diamonds. By the 17th century, as their popularity grew, the dome became higher, which also initiated the introduction of the briolette cut diamond, of which Louis XIV of France (1638-1715) was a known admirer.

As diamonds became more abundant in the early 1700s, thanks to the discovery of the Brazilian deposits, the perception and expectation of what a diamond should look like developed, and so too did the skills of the diamond cutter. What we now refer to as the ‘old mine’ cut, the precursor to the modern brilliant, became the preferred way to fashion a diamond.

Diamond cutters would study the rough’s shape intently as a guide to shaping the stone. They did this all by hand and by eye, masterfully cutting the stone to highlight its individual features and to perfect the sparkle under candlelight and low light settings. These diamonds were typically cut to follow the outline of the crystal, with large facets and an obvious culet, the deep proportions allowing the light to bounce around within the stone giving them their renowned warm and romantic sparkle. Frequently mounted in silver to enhance the stone's white colour, magnificent sets of diamond jewels were essential for court life in the Georgian and Victorian eras.

Over the years, there were variations to shape of the outline, with Louis XV (1710-1774) allegedly having commissioned a diamond to be cut in the shape of the lips of his mistress, Madame de Pompadour. This went on to be known as the ‘marquise cut’. One of the rarer cuts of diamond, due to the high degree of weight loss when cutting into the crystal shape, often losing up to 50% of the rough!

Following on from the old mine cut, and thanks to developments in the tools available in the early 1900s, cutters were able to create more symmetrical ‘round’ cut diamonds, which are commonly termed ‘old european’ or ‘old cut’ diamonds. Still cut by hand with their characteristic warm sparkle and visible culet, these stones became particularly popular during the Edwardian periods onwards.

The Art Deco period of the 1920s is often associated with geometric shapes and bold colour contrasts. Step cut diamonds, such as the emerald cut, known for their clean lines and linear flashes of light, became de rigeur. Cut with a large table facet providing a window into the stone, this cut is perhaps the most unforgiving at masking inclusions or warmth, demanding only the finest material in specific crystal shapes. The exacting proportions and symmetry of the cut required a high level of skill and precision from the cutter.

From the 1900s, innovative cutters, such as the Asscher family, introduced and patented diamonds which would go on to feature in the jewellery of the time. Throughout history, different eras have favoured certain cuts, and hand cut diamonds are simply timeless and cannot be reproduced today. Jewellery featuring these diamonds are rare, as many pieces will have been passed down as family heirlooms, recut or simply lost; all factors contributing to the high intrinsic value of antique diamond jewellery today. 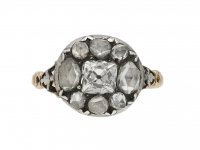 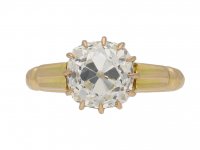 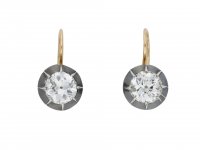 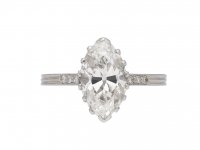 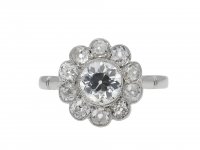 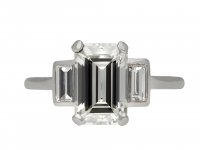 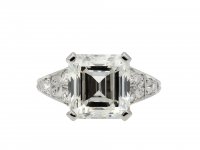