Thought to be imbued with magical powers

Sapphire is said to represent harmony, friendship and loyalty and was a favourite choice in the Middle Ages, thought so rare that they were reserved solely for royalty and upper nobility. Sapphires were thought to be imbued with magical powers such as protecting the wearer from the effects of poison, keeping the peace and curing snake bites.

The most common colour of sapphire is blue; however, sapphires are found in an array of colours. These sapphires are known as fancy coloured and can be yellow, purple, green and pink to name a few which are all featured in the collection at Berganza. Three origins recognised for producing sapphires of exceptional quality are Burma (now known as Myanmar), Ceylon (now referred to as Shri Lanka) and Kashmir. The inclusions found within the stones are how their origins are differentiated.

The ‘Jewel box' of the Indian Ocean, Ceylon, has been recognised throughout history for its abundance and range of precious gemstones. Ceylon is primarily known for its profusion of corundum gems including the highly sought after padparadscha sapphires. Ceylon sapphires are celebrated for their bright mid blue colour, often referred to as a distinctive ‘cornflower' blue hue. This attractive colour is typically a lighter shade of blue than sapphires from other mines across the world.

Burma is too a historically important source of rubies and sapphires. The Mogok Valley in Upper Burma, known as ‘the valley of gems’ is famed for its abundance of gemstones. This area is about 4,000 km above sea level and unsurprisingly the terrain is inhospitable with little or no road access. While the vast majority of stones mined in Burma are rubies, fewer than 10% are sapphires. These sapphires are celebrated for their intense, highly saturated, rich colour and exceptional quality. The term ‘Royal Blue', is reserved for sapphires of a pure and saturated blue hue and is usually associated with the finest of Burmese sapphires.

Kashmir sapphires are most famous for their colour which is unlike any other sapphire. It is described as an intense cornflower or cobalt blue with a fine velvety, milky softness. In 1881 a landslide exposed a remote snow-covered area in the Zanskar mountain range of the north-western Himalayas, Kashmir. The physical mining of these sapphires was incredibly difficult due to the harsh climate combined with the mountainous landscape. Within just six years, the old Kashmir sapphire mine was exhausted. Incredibly, all of the fine Kashmir sapphires in existence were mined between 1881 and 1887. Even today, these stones remain the exemplar by which other sapphires are compared. To own a fine natural unenhanced Kashmir sapphire is to have a truly astonishing gemstone of immense rarity.

All of the sapphires at Berganza range in colour as they originate from across the world and are completely natural and unenhanced. Come see for yourself the intense Royal blue colours of Burma to the milky softness colour of Kashmir. 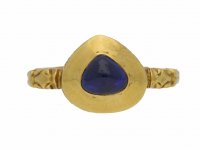 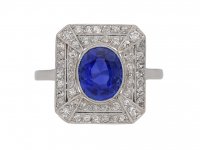 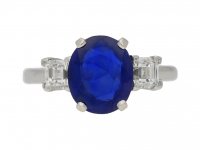