The Ancient Greeks excelled in intellectual and artistic practices, and the creation of jewellery was no exception. Today we recognise three important eras in Ancient Greece; the Archaic period, the Classical period and the Hellenistic period. Very little jewellery has survived from the Archaic era, and we rely on other forms of art, such as pottery and mosaics, which suggests that jewellery was popular and varied in this time.

In the Classical period which followed, jewellery showed magnificent goldwork. This was often in the form of wreaths, which were crafted out of gold in the form of foliage, emulating the olive wreaths worn by victors of the ancient Olympic games. These wreaths were often worn at religious ceremonies and parties, and were worn by both men and women.

Earrings were particularly popular, and their designs were increasingly elaborate, often featuring human figures and animal heads. These included lions, bulls, goats and dolphins, amongst others, and animal head earrings quickly became the most popular form of ornamentation for the ear. Other key styles included pendant earrings, often taking the form of an inverted pyramid suspended from a disc.

The Hellenistic era was a prosperous and progressive period in Ancient Greece, and is often characterised by cultural and technological advancements. Alexander the Great’s conquests into the East meant that vast new territories were gained, bringing with them mineral wealth in the form of gold and gemstones. The increased availability of gold meant that jewellers grew more accomplished and experimental with their techniques.

Designs inspired by nature, including zoomorphic and naturalistic forms were especially prevalent during this period, as were the reef knot, adopted from the Egyptians, and the crescent moon from Western Asia. Hooped earrings and new forms of necklaces which consisted of chains with animal head finials were increasingly popular.

After being at the height of its power for many centuries, the Greek civilisation declined in 146 BC when it fell to the Romans. However, its artistic practices, including the creation of jewellery, continued to hold much influence in other civilisations.

Here at Berganza we are very privileged to have a selection of original Ancient Greek jewellery in our collection. Visit our website today to find your own special piece of ancient history! 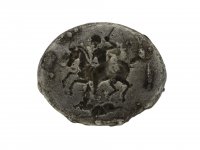 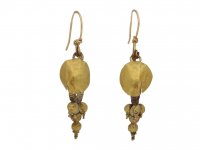 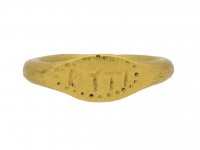 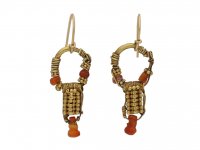