Though during the Roman Republic (c. 508-27 BC) jewellery was widely regarded as an ostentatious and unnecessary luxury, throughout the subsequent Imperial era (c. 27 BC-1453 AD) the fashion for jewellery flourished.  This was in part due to the lack of availability of gold during the earlier period, the majority of which was allocated in support of military campaigns.  Political unrest in the third century AD led to the burial of troves of jewellery, and thus, in combination with increased production, jewellery from the first few centuries of the Roman Empire has survived in relatively significant numbers.

Based on the similarity of form and decoration in jewellery finds throughout the Empire, it appears that jewellery manufacture was largely centralized in three main cities--Rome, Alexandria, and Antioch--with many of the artisans of Greek origin.  It is know that jewellers there were formed into guilds, a precursor to the medieval organizations. The portable nature of jewellery, in addition to the introduction of the Roman road network, lends further weight to the hypothesis of centralized manufacture.

Much of the earliest Roman jewellery was primarily gold, in a continuation of earlier Greek and Etruscan tastes, with a focus on intricate metalwork, though some was made in silver, iron, and copper alloys. Pierced (called opus interrasile) and stamped sheet gold, twisted wire, and granulation are all typical decorative techniques found on Roman gold jewellery. During the Imperial period colour began to feature prominently in the form of gemstones and glass, still set in gold. Emeralds from Egypt and pearls from the Persian Gulf and Red Sea were the most coveted, with diamonds and sapphires from the East appearing occasionally, usually in their natural, uncut forms. Different varieties of hardstone such as cornelian, sardonyx, and lapis lazuli were also much used, especially in cameo and intaglio rings—another jewellery tradition adopted from the Greeks.

Based on extant examples and depictions of jewellery in paintings and sculpture, the most popular forms of jewelled personal ornament in Roman times were the same as today--earrings, necklaces, pendants, and, most prevalent of all, rings.  Designs of Roman Imperial jewellery tend toward the abstract over the figural, with repeating, symmetrical placement of coloured gemstones within geometric gold work, and occasionally featuring stylized floral, foliate, and celestial forms.  In addition to being decorative, certain symbols and gemstones were believed to have amuletic properties.  The deities on signet rings, for example, were often associated with various religious sects.  Emeralds were believed to imbibe the wearer with health, fertility, and intelligence.

Roman jewellery, again like in the present day, seems to have been primarily the adornment of women, with the exception of rings.  Signet rings were principally used by men for business purposes, while women’s rings were usually decorative or religious.  The engagement ring is most probably the invention of the Romans, as it is recorded that rings were given by the groom as a physical manifestation of the betrothal agreement.  Such rings often bore images of two hands clasped or a man and a woman holding hands—the Roman action of sealing a verbal agreement. Further to the identity of the wearers, naturally the upper classes were the greatest patrons of jewellers, however some gold jewellery appears in dowry lists of the middle classes. Sporadically regulated by sumptuary laws, soldiers and freed slaves were also allowed to wear gold rings at various times.  Jewellery also had much the same sentimental significance that it does today, being given for births, birthdays, and, again, for marriage betrothals, dowries, and presents. 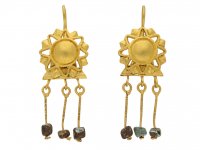 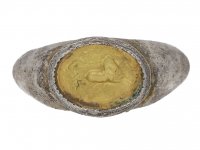 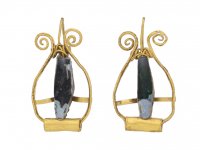 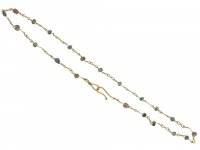 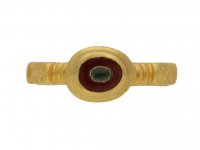 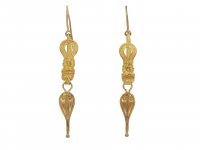 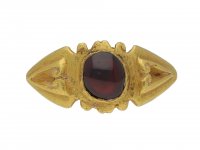 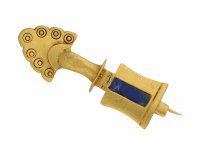