revival of Greek and Roman style jewellery in france

Jewellery after the French Revolution.

Revival of Greek and Roman style

The French revolution in 1789 affected jewellery wearing and production greatly. Escaping a fearful time when even the possession of jewellery or belt buckles could lead to the guillotine, there was a prevailing need for a new fashion. The new emerging styles reflected the dramatic change society had gone through, signalling the new philosophy of ‘Liberté, égalité, fraternité’ (liberty, equality, fraternity). There was a revival of Greek and Roman style due to the interest in the archeological movement and classical art. The neoclassical look popularised simple light and loose dresses emphasised with a tie or hem under the bodice, resembling ancient statues found in Italy and Greece. A style now commonly known as the ‘Empire Silhouette’. Bare arms gave rise to the fashion of wearing bangles, always in pairs, around the upper arms. It became popular for ladies to wear rings on every finger of their hands, even the thumbs, further adorning themselves with large circular earrings.

Filigree jewellery and finely detailed gold work became fashionable. In part because of a shortage of money, goldsmiths had become inspired by French peasant jewellery, creating pieces finely detailed in gold that were lighter and cheaper to produce. The new-found ideals of the late 18th century did not permit much use of expensive materials such as diamonds and pearls. There was a larger emphasis on cheaper gemstones. Seed pearls became popular as did garnet, aquamarine, coral, amethyst, chalcedony, turquoise, amber and lapis lazuli.

The motifs used in the late 18th and early 19th century were predominantly classical with a high level of symmetry. Popular shapes were rosettes, festoons, half fluted pillars, vases, urns, hearts, ribbon bows, portraits and snakes. Later these were supplemented with crescent moon and star brooches,

From 1796 onwards, cameos became very fashionable. When in 1804 Napoleon was crowned as Emperor of France, such was his love for this style, he had his coronation crown decorated in cameos. Known as the ‘Crown of Charlemagne’ it was made up of eight half arches adorned with shell cameos and carved carnelians which met at a golden globe, on top of which was displayed a cross. During this period until his remarriage, his wife Josephine, Empress of France, was viewed as the ultimate style icon, maintaining the fashion that people would covet and copy.

Napoleon’s passion for the antique world led to him establishing a school of gem engraving in 1805. With the new Empire, came some semblance of security and luxury trades were revived with enthusiasm. Jewellery became more abundantly worn and jewellery houses benefited from this rise in luxury, finding new clients in the prospering elite of French society. Paris remained the fashion capital and other countries still drew inspiration from the latest fashions which were in vogue there.

Amongst our extensive collection of ancient, antique and vintage collections at Berganza we have a rare selection of early jewels from the 17th and 18th centuries. Shop instore or online today to acquire your own piece of history. 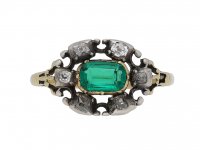 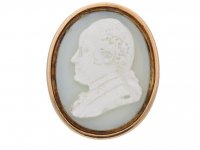 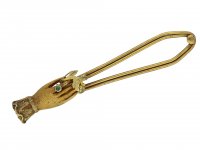 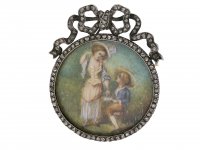