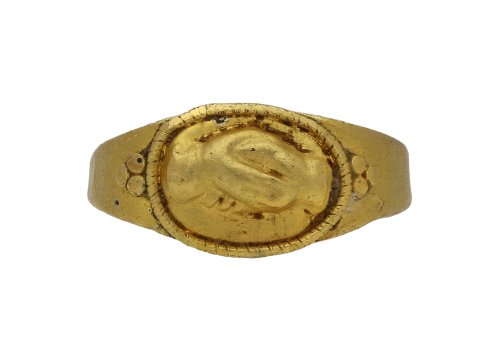 "With this ring, I thee wed....."  With these immortal words and an exchange of rings lives change irrevocably forever.  Long after the honeymoon is over and the wedding dress is packed away in the attic, your wedding ring will stay with you, forever reminding you of your happy day.  Your wedding band becomes a part of your identity and defines you as who you are, but few of us stop to recall the fascinating history that has influenced the ring you wear on your hand.

The concept of a wedding ring is very old.  Whilst there was no firm practice of giving rings at the marriage ceremony proven to be established in Ancient Greece there are many rings bearing romantic inscriptions from the period.  Another type of ring which may well have been involved is the Hercules knot.  This type of ring may symbolise fidelity or the unclothing of the bride on the night of the wedding.

The Romans followed this with the creation of the first engagement ring.  They started holding a betrothal ceremony where prospective bride and groom were pledged to each other.  During this ceremony a ring was given by the man to the woman.  In the actual wedding ceremony itself instead of a ring exchange the hands of the bride and groom were joined.  This practice led to the betrothal rings starting to feature clasped hands from around the 2nd century AD.  This was the precursor to the Italian ‘fede' or faith ring.

It was only after the growth of Christianity in 4th Century Byzantium that the exchange of wedding bands during the wedding ceremony itself became a more regular occurrence.  It was during this time that the overt Christian iconography started to appear with Christ often appearing with the married couple.  The importance of the new religion is clearly pre-eminent in the ceremony.

In the middle ages a new form of ring appeared.  By the 13th and 14th century AD it was commonplace to give a ring as a sign of engagement or token of love followed by an exchange of marriage rings.  New ideals of courtly love stemming from the chivalric code started to influence the design of rings.  French poetry started to appear engraved on rings with little words of love or messages.  These were the first posy (French- poesie or poem) rings.

This period also saw the start of precious gemstones in both engagement rings and wedding rings.  Different coloured stones had different meanings for example sapphires meant marital chastity.  Decorations of Hearts and flowers and other love symbolism appeared on rings.

During the 16th century posy rings continued to grow in popularity and diamonds had firmly been established as the stone of everlasting marital love.  Plain wedding bands started to be used for the ceremony itself.  Mary Tudor wore a plain band when she married Philip of Spain.

By the 17th century the wedding rings and engagement rings were commonplace.  In his treatise titled the marriage ring written in 1653 clergyman Jeremy Taylor said, "It ties two hearts by an eternal bond, it is like the Cherubims flaming sword set for the guard of paradise."  Posy rings flourished in popularity during this century to the point where books of inscriptions were published for jewellers to work from.

Queen Charlotte, the wife of King George III was a great trend setter and she was given a solitaire diamond ring as an engagement ring.  In order to protect this she wore a keeper ring which was engraved with the date of her wedding and set all around with diamonds.  This can be considered the precursor to the eternity band.  Posy rings continued with their popularity until the end of the 18th century and then tailed off possibly due to the increased amount of hallmarks required by law.

The 19th century saw romantic symbolism grow and along with the discovery of new mines in South Africa, the popularity of the diamond single stone ring.  The use of plants and flowers on both engagement rings and wedding rings continued to flourish particularly under the romantic and imaginative Victorians.  Daisies meaning loyal love and ivy signifying long-lasting love were particularly popular.

Engagement rings of many different kinds continued throughout the 20th century with the plain gold wedding band remaining the classic choice.  However Vogue noted in 1938, "What better emblem of unending devotion than eternity rings."  They become the choice of celebrities such as Marilyn Monroe and Princess Marina of Greece.

Here at Berganza we have a wide selection of vintage wedding bands, including engraved wedding bands, posy rings and eternity bands.  In fact, as a leading antique ring specialist, we are proud to have one of the largest non-museum collections of posy rings.  For our existing clients we also offer a bespoke, hand-made ring service.  This wonderful service is a highly labour intensive process which achieves a level of quality which simply cannot be replicated by the cast rings seen on the high street.

We greatly look forward to welcoming you to our store and showing you our exclusive selection of wedding bands. 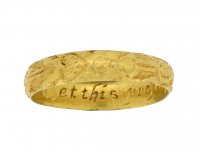 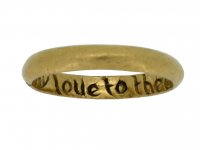