A Concise History of the Diamond Solitaire

A Concise History of the Diamond Solitaire

A very attractive and classic style of engagement ring

A solitaire diamond ring is a very attractive and classic style of engagement ring - namely a band of metal set with a single diamond. Such rings have long been associated with eternal love, perhaps because diamonds are the hardest of all gemstones, a property which is central to their link with unending devotion. Interestingly, the word ‘diamond’ is derived from the Ancient Greek ‘adamas’ meaning everlasting or unbeatable.

The diamond solitaire can trace its origins back to Ancient Roman times, when gold bands were occasionally set with a single uncut diamond crystal. These crystals would have been acquired directly from Indian traders and were highly prized by the Romans, as explained by Pliny in his Naturalis Historius:

'The substance that possesses the greatest value, not only among the precious stones, but of all human possessions'

Indian and Islamic jewellers were the first to facet this gemstone and they did so by polishing the stones with a powder made from ground up diamonds of lesser quality. This technique eventually made its way to Europe, where it was first adopted by Venetian lapidaries in around 1330. The earliest form of faceted diamond is known as the point cut, which was formed by cleaving the crystal in half and polishing it to achieve a four-sided pyramidal shape. This later evolved in to the table cut, with points on either side of the stone removed to expose a flat crown and culet. Individual stones were subsequently set in to closed back box collet settings and mounted on intricately carved shanks with fine enamelling.

Discovered in the 1720s, Brazilian diamond deposits supplemented the dwindling supply of Indian stones and increased the availability of diamonds like never before. The Georgian period saw the introduction of silver set diamonds, most often in closed back cut down settings mounted on carved gold shanks, occasionally with diamond set shoulders. Technological advancements meant that diamonds could now be faceted in a variety of ways, predominantly as rose and old cuts.

In the Victorian era the solitaire grew even more elaborate, as goldsmiths experimented with richly carved settings and whimsical forms. Snake rings were popularised by Queen Victoria, who received one upon her engagement to Prince Albert. The coiled serpent was considered symbolic of unending love – the metaphor made complete when set with a single diamond. As the century progressed, advancements in goldsmithing allowed diamonds to be set in more delicate, open claw settings, whilst the discovery of major deposits in South Africa increased the availability of this precious stone. The influx of rough diamonds meant that lapidary techniques evolved considerably during this time – cutting houses were established in important centres and new technologies, such as the bruting machine and motorised diamond saw, resulted in the creation of the first truly round brilliants.

The dawn of the twentieth century heralded a new age in jewellery, and the diamond solitaire came in to its own during this period. Technological improvements made platinum the metal of choice for jewellers working in the Edwardian and Art Deco styles. The supreme strength of this material meant that it could be manipulated to produce finely pierced galleries and intricate backholing, and the whiteness of the metal and its ability to resist tarnish perfectly accentuated the bright whiteness of the diamond. In the 1920s and 30s, square cut diamonds brought a refined geometric look to the classic solitaire.

During the Second World War, platinum was declared as a strategic metal and reserves were needed for the war effort, resulting in a return to yellow gold jewellery, in the form of bold, chunky designs. In 1948 a young female copywriter working for N.W. Ayer & Sons of Philadelphia first coined the DeBeers slogan ‘A Diamond is Forever’, cementing the diamond solitaire in its role as the quintessential choice for an engagement ring.

The diamond solitaire has appeared in a variety of different guises throughout history, yet it remains a classic and timeless design. Visit us in store or browse our website to find the perfect solitaire for you. 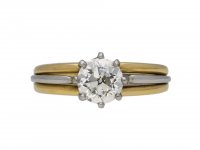