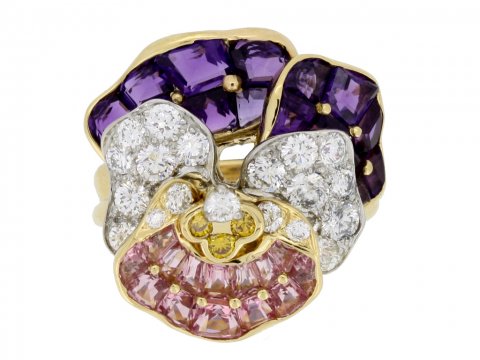 When considering a piece of ancient, antique or vintage jewellery, often there is more to the piece than meets the eye. At first glance, you will no doubt appreciate the beauty of its craftsmanship however should you notice any motifs, it may be worthwhile considering whether there is a cryptic meaning which may reveal itself on further research.

Civilisations from the beginning of time through to the modern day have always sought out meanings in everyday items. However cryptic symbolism in jewellery was never more prevalent than in the Victorian era, a time of ridged rules of etiquette which encouraged veiled meanings.

Some motifs are very well known and much used, such as the horseshoe meaning ‘good luck’, hearts signifying ‘love’ or ‘passion’ and the arrow representing ‘mortality’ or ‘love’.

Motifs can even be combined to change their overall meaning. Crowns for instance stand for ‘victory’, but when placed above a heart, the meaning changes to ‘the ruler of my heart’. For a very fine Georgian example of this grouping of symbols, see reference 20650.

Flowers have a multitude of meanings, each specific to the flower or even colour of the flower. A charming example is the pansy which is a play on the French word ‘pensée’, meaning ‘think of me’, see Oscar Heyman Brothers’ exceptional pansy ring dating to the 1940s, reference 20016.

Animals, birds and insects play an important role in this language of symbols. If you see butterflies or flying birds, for example the Victorian brooch reference 13477, you can identify that the meaning is ‘the soul’. Bees, perhaps unsurprisingly, signify ‘efficiency’ and ‘organisation’. Snakes, a favourite symbol since ancient times, have the meaning of ‘everlasting love’, see ancient Romano Egyptian snake ring reference 20527 or Art Deco cufflinks reference 20347. Dogs denote ‘loyalty’ and the late medieval silver ring reference 16578 is an enchanting example which unites both the symbol of loyalty with the clasped hands motif. The clasped hands represents the marriage agreement and as such this ring is a very early example of a betrothal ring. A finely carved 2nd century AD Ancient Roman cameo ring displays the eagle motif which signifies ‘strength’ and ‘wisdom’. More esoterically, an amusing meaning is assigned to lizards- ‘surviving love’ as they were once thought to be fireproof!

The delicate stickpin reference 15741, with feathers to top symbolises ‘obedience’; the scallop shell signifies ‘rebirth’ or ‘travel’; a shield suggests ‘defence’ and a star is a sign of ‘guidance’. There are a thousand and one symbolic meanings hidden in jewellery from trumpets meaning ‘celebration’ to a buckle denoting ‘protection’ or ‘binding loyalty’. Here at Berganza we have a wealth of beautiful ancient, antique and vintage pieces ripe with meaning for each and every taste. 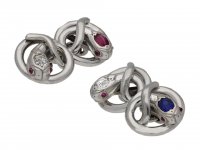