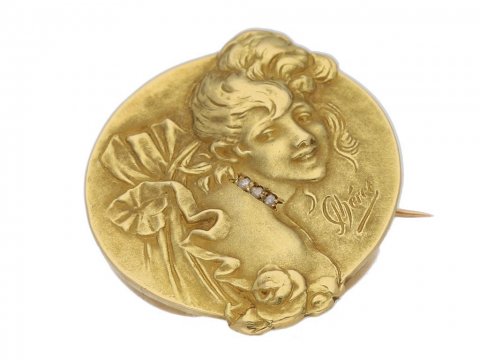 Medal-jewels were popularized by French jewellers in the late nineteenth century, urged forth in large part by a renewed appreciation in France for the art of engraving.  Technology also played a hand, with the perfection around this time of the reducing-lathe, which allowed for greater accuracy in miniature than hand-engraving.  The fashion for this form coincided with the Art Nouveau design movement, and thus there appeared a proliferation of jewels composed of small medals, often in the form of a pendant, brooch or sometimes cufflinks, which bear the hallmarks of this style.

These jewels most typically focused on the depiction of a young lady, the feminine form being a central theme in Art Nouveau design.  The subjects are almost always in profile, which begs a comparison with cameos, a fashion in decline around the time medal-jewels began to be produced in France. This transition was first perceptible in the 1870s when there was a marked move away from shell and hardstone cameos toward jewellery set with ancient coins.  As reported in Mme Demorset’s ‘What to wear’ for the Fall and Winter of 1880-1881’, a New York publication, “Antique coins have played their part in modern ornaments, and gold or silver pieces that were current before the dawn of the Christian era are seen upon the bosoms of the belles of to-day.” Lucien Falize, the renowned French jeweller, also produced a number of ancient coin-set jewels circa 1890.

The medal-jewels were a next, and perhaps final, step in this genesis.  They had the benefit of combining a new style with an accepted form.  They were also relatively affordable, even though they were made by some of the most prominent artists in France, and very often signed by the maker.  Some jewellers moved completely from specializing in cameos to medal-jewels;  Henri Vever records, for example, that the Parisian jeweller Louis Desbazeille specialized in cameos from 1872 to 1882, general jewellery from 1882 to 1889, and then medal-jewels from 1889 onwards.  A number of engravers excelled in this jewellery form, and sold to the top jewellery houses, such as Boucheron and Vever.  Jules Chéret, a poster artist known for his depictions of café society, which are today icons of Belle Époque Paris, produced a number of medal-jewels of elegant ladies in profile in his ‘Parisienne’ series; these were set with rose cut diamonds, a derivation of the cameo habillé, where the figure in a cameo is depicted wearing jewellery set with actual gemstones.  Frédéric de Vernon was another famous maker of medal-jewels, as were Julien Duval and Georges Le Turq, who met at the École des Arts Décoratifs, after which point they formed a partnership, becoming perhaps the most successful of the medal-jewellers.

Another variant of the Art Nouveau ‘femme’ fascination in this form of jewel were religious medals.  Particularly popular in France were Lourdes medals, commemorating a series of visions of the Virgin Mary to the young girl Bernadette Soubirous (later St Bernadette, after her canonization in 1933) in the village of Lourdes in the foothills of the French Pyrenees in 1858. Others depicted more general saints intended for Catholic consumption, the majority of which portray Mary, and the next most common being Saint Christopher, the patron saint of travellers. Vever published an image of ‘The Virgin of the Catacombs’ pendant medal by Duval and Le Turq, made in 1891, which he reports was highly popular at the time.  Vernon is also known to have made religious medals around the turn of the century, including those of the Virgin and Saint Cecily.  Whatever the subject, the form has been long overlooked in an otherwise exhaustively coveted style of antique jewellery.  Perhaps soon Art Nouveau medal-jewels will be again appreciated as the works of exceptional design and craftsmanship they are. 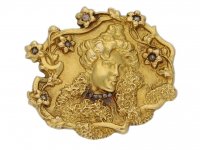