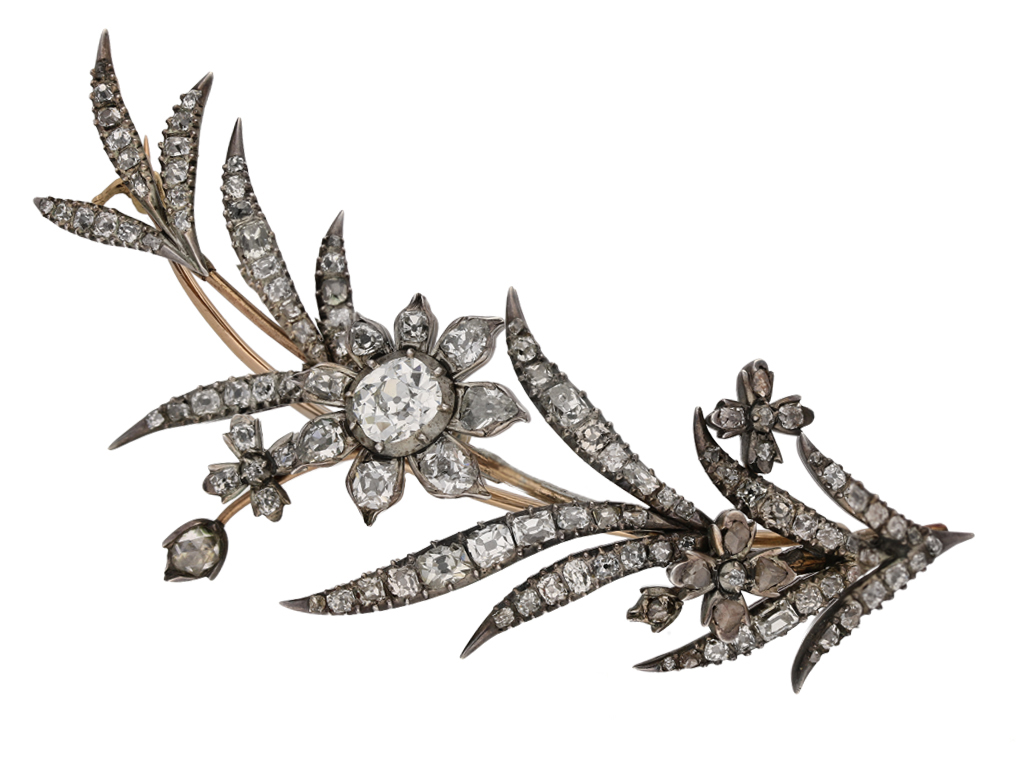 Despite the rapid progress of history in this period, Georgian jewellery was balanced, symmetrical, regal and elegant. Closed settings covered the backs of stones and many pieces were routinely remounted to keep abreast of current fashions. Larger stones, clusters of gems (See Item Ref - 11355), and ribbon style bows supported by pear-shaped drops were the favoured motifs. Necklaces were, for the most part, simple rivières. The ever-popular brooch (See Item Ref - 7790) surfaced in sprays of foliage, starbursts, crescents, and baskets of flowers.

This turbulent period of history begins with the ascension of George I to the throne of England with no idea of the revolutions to come. Fahrenheit invents his mercury thermometer. Handel premiers his ‘Messiah’ and Diderot begins work on his exhaustive Encyclopedie. New England colonialists disguised as Indians climb aboard British Merchant ships carrying tea in Boston Harbour and heave the tea overboard. The steam engine is invented, breaking ground for the Industrial Revolution. Uranus is discovered. So is Uranium. The Montgolfier brothers leave the earth in a balloon, being the first humans to do so. Meanwhile, mutiny is in the air. The French revolution erupts the same year that Masters Mate Fletcher Christian wrests authority from Lieutenant William Bligh, and takes command of Her Majesty's Ship, the Bounty. George Washington is elected the first American president. The Smallpox Vaccine is discovered. Beethoven writes his first symphony. The battery is invented and the first photographic image is made.

However it is the human passions of the period that most affect the jewellery trade. After the French Revolution, jewellery reflects the Ancien Regime and its anti-Republic sentiments. Most jewellery was exported from France by fleeing aristocrats selling it to survive. Other treasures including the Crown Jewels were confiscated and some dismantled. What original jewellery was created during the Revolution tended to commemorate that event and lacked both style and imagination. When the Terror ended and the Directorate took over, France gradually regained its stability. Luxury items resurfaced and the jewellery trade revived.

A new dawn reflected the rebirth of equilibrium among a traumatized people. There rose a Greek revival of sorts and a love of Roman antiquities that harkened back to former times of culture and order. Women wore empire line dresses designed as high-waisted tunics; idealizing the feminine form as Greco Roman statuary. Springtime colours of white, yellow, lilac and pistachio brought back the breath of life after the Reign of Terror's pall of death. Whatever jewellery was worn enhanced rather than detracted from that imagery. Rings were worn on every finger; simple gold bands decorated wrists, forearms and the upper arms. Long chains of flat geometrical links often adorned with stylized heart motifs or a Greek Key pattern, these were worn around the neck, across the shoulder, or crossed on the bosom. Neo-Classical and Roman inspired hairstyles brought with them the popularity of pendant earrings cut from thin sheets of gold with two to three gold links of flat geometrical design shaped as lozenges, shields or acanthus leaves.

Napoleon bought some new crown jewels back to France and redesigned others to reflect the new fashions. Parures of rubies, emeralds, sapphires, pearls and diamonds were worn for state and court occasions. These were decorated with Greek Keys, acanthus leaves, palmettes, formal volutes, laurel leaves, arches and eagles. Cameos and Intaglios from Italy celebrated Napoleon’s campaigns and Parisian jewellers set them in precious stones and metals, putting them in tiaras, necklaces, bracelets and earrings mounted in simple gold collets with seed pearl borders joined by light, delicate gold chains. Despite Paris's best efforts, the greatest cameos still came out of Italy, signed by such famed designers of the times as Pistrucci and Girometti. Meanwhile, the Napoleonic campaign in Egypt introduced new elements of design into everything. Jewellery brimmed with sphinxes, pyramids, palms and papyrus leaves. Closed settings with coloured foil backing, so long the standard, were gradually losing favour. The new open mounts were letting light through to enhance the natural brilliance of fine gems.

Sometime after 1820 Naturalism returned to waistlines as well as to jewellery. Accents were suddenly seen as roses, morning glories, fuchsias, cornflowers, ears of wheat and leaves of countless varieties. There was a short revival of the formal style recast in the modern mould, but it didn't last long. Because years of war had depleted resources, jewellery designers had to do much with little to make it appear more than the sum of its parts. Semi-precious stones were clustered to enhance their richness, while the filigree cannetille style was seen everywhere, with red, yellow and green gold combined for new effects. The designer Edouard Marchant created cuirs which started a fashion stampede. These were thin gold leaf rolled and cut to resemble leather scrolls engraved with decorative motifs. Painted enamels came out, mounted on gold and embellished with gems and decorative reliefs. Special enamelling processes such as Champlevé and Guilloché found great favour with the buying public. Gem-set aigrettes decorated the hair, necklaces and bracelets abounded, and coral gained such popularity that it was absolutely ‘de rigeur’ for women of fashion to own coral parures.

Tiaras were designed as diamond-set laurel leaves with ruby berries, or wreathes of diamond leaves. There were openwork designs with suspended briolettes, and a Hellenistic version rising to a gable point at the centre of the brow and sloping downwards. The Bandeau, a version of the tiara, displayed gem-set clusters or cameos worn on the forehead. Combs had decorated rectangular mounts, often as filigree galleries surmounted by carved coral or amber beads, while Spanish combs came with metal or tortoiseshell prongs and surmounts of gems, cameos, or gold scrollwork. Earrings were made à poissarde, in geometrical patterns set with gems, but mostly as dangling pendants and elegant, gem-encrusted pear shapes. Necklaces were gold chains of cameos, intaglios, and Roman mosaics. They also held gems or seed pearls set in light, delicate gold work. Pendants, usually worn en suite, were mostly seen as Maltese crosses or a cruciform embellished in precious or semi-precious stones.

Bracelets were worn in great numbers and including wide ribbons of gold mesh. Bracelets consisting of a silk ribbon with a gold clasp were called à la Jeannette. Diamond or gemstone link bracelets were done in geometric patterns. Rings were plentiful and worn almost constantly. Most were seen as half hoops set with a single or a double row of gemstones with shanks of soldered gold wires done in leaf designs that splayed out to form shoulders. Gem-set navettes were common, as were large cantered gemstones surrounded by clusters of flower head styled gems. Brooches were quite the favoured item, done in sunbursts, stars and crescents. Formal and spiky sprays of gems, and simple flower head brooches made up the balance.

Bringing all these together were parures, seen almost everywhere. These were found in precious and semi-precious stones, usually mounted in extremely fine cannetille (See Item Ref: 7845)settings that imitated fine lace enriched with leaf, rosette and burr motifs. Parures were especially popular because fashion dictated that jewellery be worn in abundance. Gems, or at least articles of gold, had to be dripping everywhere and in every form. These included pendants of all shapes, especially cruciforms, necklaces, earrings, rings, bracelets, combs and brooches. Leaves, flowers and scrolls stamped from gold leaf seemed to decorate everything.

Three other jewellery items were ubiquitous during this period and should not be overlooked. Small buckles, generally oblong, round or oval, were worn at the centre of a belt or a ribbon and marked the high waistline. While these served no overt function, they were certainly pretty, decorated with motifs in pearl, topaz, amethyst or gold. Men's tiepins, another lovely indulgence, were cast in enamel, onyx, turquoise, cornelian, and diamonds, or as a combination of gemstones with chased gold fashioned in naturalistic designs such as snakes, birds or animals' heads. Finally, no gentleman of prestige was without his seal. These items were made in linear designs with domed settings. Simple surmounts were fashioned as a lyre, stirrup, scroll or baluster. Common were family crests or coats-of-arms engraved in bloodstone, cornelian, citrine, quartz, amethyst, smoky quartz, or chalcedony set in gold. For the not so rich it was coloured pastes and gilded metal with an engraved motto in place of a coat-of-arms.

The modern world was gathering fast apace, but with the ascension of Queen Victoria to the English throne a tone would be set that would affect not only Britain but also the world. Whatever its faults, or its false sense of stability amidst the turmoil, this period was the last gasp of old world privilege. It would stand to usher the old century out with a modicum of grace before the arrival of that looming monster, the Twentieth Century. 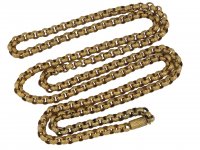 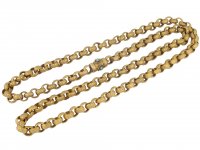 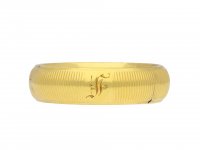 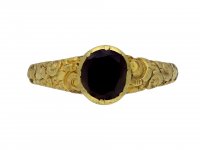 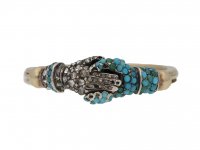 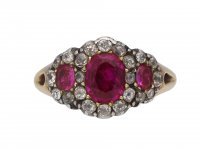 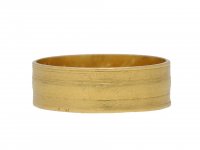 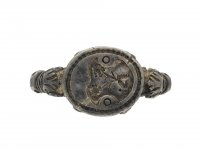 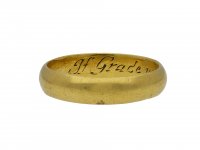 Gold posy ring, ‘If Grace unite love will be right’, circa 18th century.