Citrine is one of the most valuable and popular gemstones in the quartz group. Along with topaz it forms the birthstone of November and is also recognised as the gemstone to celebrate the 17th wedding anniversary. With every special occasion that comes around in your life this month, we help make it memorable with unique and fashionable citrine or topaz jewellery to match.

The name “citrine” was derived from the Latin word citrus, meaning “citron” (a fruit closely related to the lemon). Stunning, vibrant and glowing yellow, this gem combines a warm, attractive colour with good wearability and a moderate price. History, folklore and legends of citrine are interwoven with that of yellow topaz, as throughout the centuries citrine was often mistakenly identified as topaz. In its golden form, the ancients believed the gemstone was a gift of the sun and had the power to disperse depression and manage anger. If a man wears the gemstone he is thought to become more striking and intellectual. For women, it is said to make her fertile, happy and contented.

In the past, natural citrine or yellow quartz has been discovered in France and Spain, and on the Isle of Arran in Scotland. Queen Victoria was great lover of citrine, and largely due to Queen’s fascination with the gem, citrine became a popular gemstone for traditional Scottish kilt pins and shoulder brooches. Frequently, citrine had also been used to adorn the hilts of daggers used by Scottish warriors in the 17th century. Citrine again rose to prominence during the Art Deco period. In 1937 the world-famous jewellery house Cartier created a beautiful “London Citrine and Diamond Tiara” for the coronation of King George VI.

Topaz is a precious stone also known as a birthstone for November.  Topaz has an exceptionally wide colour range that, besides brown, includes various tones and saturations of blue, green, yellow, orange, red, pink, and purple and the major topaz sources today is Brazil.

For centuries, many people have believed that topaz worn above the heart assures long life, beauty, and intelligence.

The biggest faceted gem ever recorded is a topaz in the collection of the United States Smithsonian Institution. Named the “American Golden” it’s a light yellow stone that weighs 22,982 carats (4.60 kg or 10.14 lb.), another famous topaz gemstone is the 1640 carat Braganza "Diamond", which is part of the Portuguese crown jewel collection.

Presently topaz jewellery is experiencing a veritable revival. Among the modern day collections the magnificent pair of Imperial topaz earrings were sold at Christie’s in 2010 for 650.000 US$.

Imperial Topaz is the most sought after of all natural topaz. Its rich golden colour with reddish and orange overtones is generally not enhanced by any kind of treatment. If you are trying to find a topaz or citrine whose colour is completely natural, look no further and visit our store in the heart of Hatton Garden, at Berganza we have an extensive collection of gemstone antique jewellery that would correlate to any style and occasion. 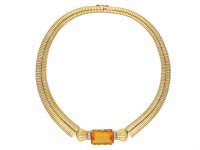 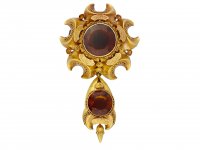 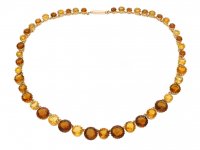 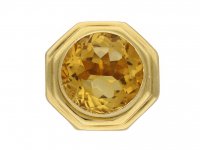 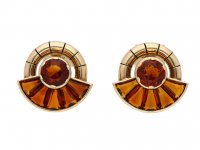