Signets: Sealed with a Ring

Signets: Sealed with a Ring

A signet or seal ring is one that features a central incised decoration, either engraved directly into bezel of the ring or into a flat gemstone. The signet ring is one of the earliest forms of jewellery, originally a utilitarian object used to authenticate documents by impressing the seal into wax or clay, thus transferring the owner’s name or symbol.

Some of the earliest known signet rings were made by the Minoans in the sixteenth century BCE, though cylindrical signets set as pendants were used by the Sumerians as early as 5000 BCE. The ancient Egyptians wore signets rings with raised engraved metal bezels as well as rings set with hardstone scarabs which rotate to reveal a signet on the bottom of the stone. The ancient Greeks also embraced the practice of wearing signet rings, most commonly set with gems carved with gods and goddesses, though they are thought to have become primarily decorative in purpose. It was the ancient Romans who reinstated signets for sealing purposes. The use of seal rings continued throughout the Byzantine Empire, though they were made primarily in metal, as knowledge of gem carving had been largely lost, and Christian symbolism replaced the Greco-Roman deities.

During the medieval era heraldic rings, or rings carved with crests or coats of arms, first came into use, the earliest examples of which are Italian in origin. They often became family heirlooms, passed down through generations, bloodstone being the stone of choice in these cases for its evident symbolic suitability. By the eighteenth century functional seal rings became increasingly obsolete due to the spread of literacy. Though decreasing in terms of practical purpose, signet rings were by this time an established accessory, the subject of the carving often relating to the wearer’s personal interests. The mid-century discovery of the ancient Roman cities of Pompeii and Herculaneum inspired a renewed interest in Classical objects, including carved gems, further encouraging the fashion, and new schools of gem carvers arose to provide for the demand.  At this time women were known to have worn signets as well as men. While her husband collected antique specimens, Georgiana, Duchess of Devonshire (1757-1806), wore various hardstone signet rings commissioned from contemporary Italian carvers.

The persisting taste for Classicism as well as a revival of all things Medieval continued to promote the fashion for signet rings throughout the nineteenth century.  Today both Greco-Roman signets and heraldic rings remain popular, no doubt due to their longstanding role as a discrete display of the erudition and prestige of the wearer. 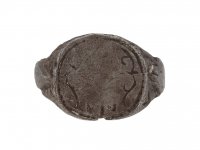 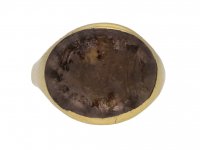 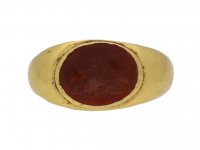 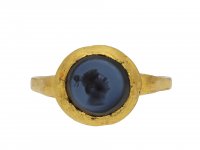 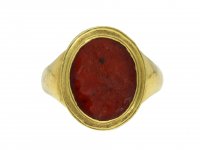 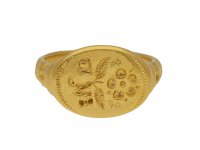