Those born in the month of June are fortunate enough to be able to call pearls their birthstone.  Often referred to as the 'Queen of Gems', pearls were perhaps the first gemstones to be collected and set into jewellery.  This is in comparison to their counterpart, the diamond (the ‘King of Gems'), which only became widely popular in the late Middle Ages when diamond cutting technology first emerged, and which were then exponentially boosted by the discovery of the first major non-alluvial deposits of diamonds in South Africa in the late nineteenth century.

As George Kunz, the eminent late nineteenth century gemmologist points out in his tome on the subject, The Book of the Pearl, ancient fish-eating tribes were likely the first peoples to appreciate the superb natural beauty of pearls.  In written history pearls first appear in Asian cultures, in both ancient Chinese and Indo-Persian sanscrit texts as early as four thousand years ago.  The oldest extant example of a pearl necklace, now in the collection of the Louvre, is thought to have been made circa 350 BC, and was found in modern day Syria.  Known as the ‘Susa’ necklace due to the name of the site where it was discovered, it is composed of three rows of strung pearls with metal spacers, a form which has changed little over the millennia.

Pearls were also popular in Ancient Rome, Pliny writing of them in his Natural History (Lib. IX, c. 35),  ‘The richest merchandise of all, and the most sovereign commodity throughout the whole world, are pearls.’  As alluded to above, the primary ancient sources were found in the Orient, particularly in the waters around India and the Arabian Gulf, which continued into the nineteenth century until they were largely depleted due to over-fishing combined with pollution.  These sources were rendered fully obsolete with the invention of the cultured pearl, patented by Mikimoto Kokichi in 1916, a process by which pearls are produced via implanting a shell ‘seed’ into the mantle of an oyster.

Thanks to Mikimoto, pearls became more widely available, and perhaps even more popular than ever, one immediate trend being the long strings of cultured pearls that were an integral part of the flapper image of the 1920s.  However, another result was a decline in appreciation for the rarity of natural pearls.  So unusual was it to have a string of matching symmetrical natural pearls that only the wealthiest individuals could afford them.  It is said that the present Cartier store in New York City—a neo-Renaissance mansion on Fifth Avenue—was acquired by Pierre Cartier in 1909 from the owner, a hugely successful banker named Morton Plant, for a string of pearls which as the time was said to be worth one million dollars.

There are a number of famous pearls throughout the span of jewellery history which are all of course natural, perhaps the most famous of all being La Peregrina, a large and perfectly symmetrical pear shaped pearl weighing 55.95 carats.  Believed to have been discovered by a slave in the early sixteenth century in Panama, it was first owned by King Phillip II of Spain, and then given by him to his wife, Mary I of England.  After passing through the Spanish royal family for centuries, and having the benefit of being depicted in portraits of its owners by such masters as the Baroque painter Diego Velazquez, the pearl was finally bought by Richard Burton for Elizabeth Taylor.  With her recent passing La Peregrina is set to be sold at Christie’s, which will perhaps spark a renewed interest in natural pearls. 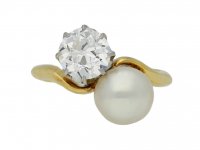 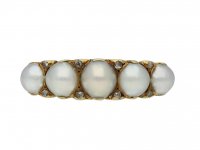 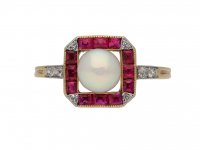 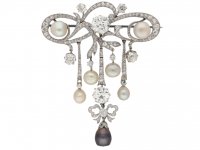 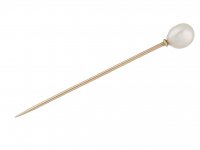 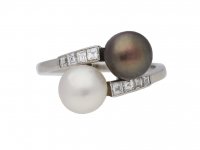 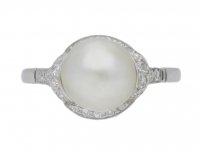