Discover the Gods through intaglios and cameos!

Discover the Gods through intaglios and cameos! 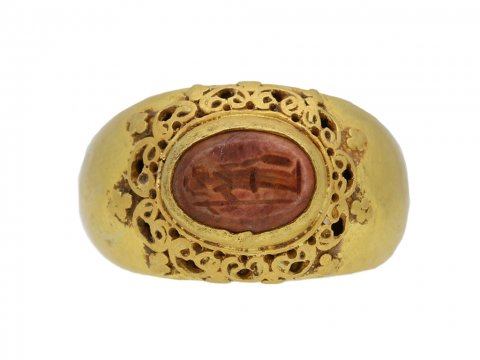 Gods and goddesses have been depicted in jewellery for millennia, used as talismans, status symbols, insignia and for purely decorative purposes. Here at Berganza, we have an extensive collection of both Ancient Greek and Ancient Roman rings which depict gods and goddesses, from Mars the Greek god of war to Minerva the Roman goddess of wisdom. These detailed depictions are often carved into and onto gemstones and are known as intaglios and cameos.

Intaglios are carved gemstones; a design is cut into the surface meaning these pieces can also be used as seals. Intaglios can be traced back to the Sumerian period (4500 – c. 1900 BC) in Mesopotamia, modern-day Iraq. Initially, only relatively soft stones were used; with figures being cut or gouged free-hand in the gemstone. However, precise detailed images could not be produced on such soft material. To create more detailed intaglios, new technologies were required to carve harder, more durable materials such as sardonyx and garnet. A cutting wheel and drill, driven by a bow, with the point fed with an abrasive powder was used.

These techniques were passed down to the Ancient Greeks and Romans, enabling the production of more challenging images. A finely carved seal was of great importance as they were often used by their owners to validate legal documents, a highly detailed image made forgery more difficult. The outstanding detail seen in intaglios from this era can be seen in many of our pieces. For example, the Ancient Roman intaglio ring that depicts Apollo the god of healing, holding a staff and laurel wreath and Salus the goddess of health and well-being, holding a snake entwined rod.

As technologies and skills progressed, the cameo was created. Cameos are a gemstone upon which a design has been carved in relief to leave a raised design. They are believed to have originated in Hellenistic Greece, during the 3rd century BC. These miniature sculptures were carved out of hardstone and are also thought to have been created using the bow drill. At this time gemstones were prized above all other possessions, leading to high standards in the art of gem-cutting. The materials would have been immensely difficult to carve and engrave in such detail with the tools and materials available at the time. Cameo rings are purely decorative, and were used by the upper echelons of society to display their status. Pliny the Elder said that even the roman emperors wore cameos with ceremonial dress, showing just how highly these rings were regarded.

The remarkable skill of carving gemstones at this time was truly exceptional, their depictions are so detailed that hundreds of years later we can still easily decipher who the craftsmen were portraying. Most depictions include established iconography of attributes and other objects that help identify each god and goddess. For example one of our intaglios rings is intricately carved with Hercules fighting the Nemean lion, the fist of his twelve labours. These miniature works of art are multidimensional and so offer a unique way of depicting the gods, goddesses, heroes and their myths and legends.

Pieces from ancient times are often made from high carat gold, due to its soft nature. Gold in this period was not standardised and goldsmiths mixed alloys at will to create the perfect metal settings. This allowed them to shape and mould the metal with the tools available at the time. The higher gold content within these pieces gives them a beautiful rich yellow colour, a lovely and distinctive feature of these remarkable pieces.

True rarities, many people do not know you can wear and enjoy such pieces today. These rings are also collector's items, offering an investment that is a tangible link to our forebearers. To find your very own piece of history visit Berganza where our specialists would be delighted to show you our vast collection of intaglio and cameo rings! 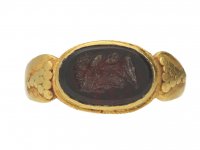 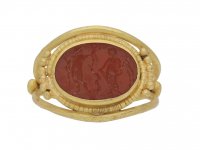 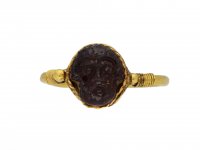 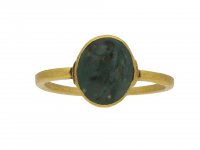 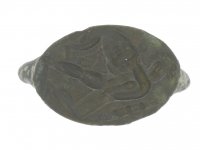 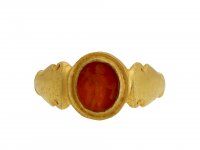 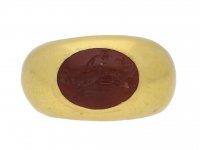