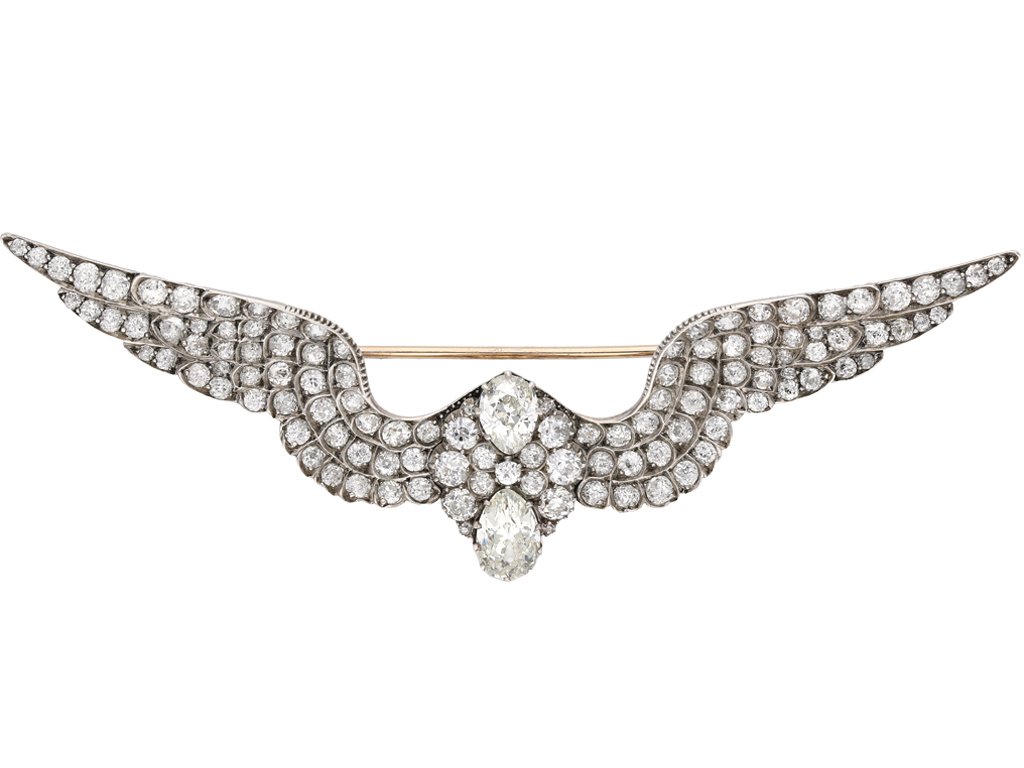 This brooch appears in 'Pre-Raphaelite to Arts and Crafts Jewellery', by Charlotte Gere and Geoffrey Munn, p. 12.

One of the most collectable makers of antique jewellery is the London house of Giuliano, founded by the Neapolitan-born Carlo Giuliano, and succeeded by his sons Carlo and Arthur Alphonse. Though unmarked, this piece is likely to have once been a part of a tiara or hair ornament made by Giuliano due to its similarity to other signed pieces by the firm. There are five known pieces, in addition to the present jewel, by Giuliano which are comprised of a pair of diamond set wings with a larger stone or stones placed at centre. All five—a convertible hair ornament/brooch, a tiara, and three brooches—appeared in Wartski’s 1989 exhibition Artists’ Jewellery: Pre-Raphaelite to Arts and Crafts, and additionally two of these five are featured in the book of the same title by Charlotte Gere and Geoffrey Munn. The present piece is most similar to the diamond hair ornament with removable brooch, which is signed ‘C & AG,’ and in a fitted Giuliano box. The most obvious differences are the detachable hair comb, signature, and fitted box. The format of the brooches, however, are highly similar, both with pavé set diamond wings and two opposing pear shaped diamonds set at centre, the number of stones and exact placements only varying slightly. Wartski generously confirms authentication of the brooch to the Giuliano firm, being that the piece was at one time in their possession, as is indicted by its current fitted Wartski box.

As it is unmarked, the question yet remains as to whether the brooch was produced under the tenure of the father or the sons. Of the five other known winged Giuliano pieces mentioned above, four are marked ‘C & AG,’ the mark of Carlo and Arthur, who ran the shop from 1895 until 1914; the remaining winged jewel is unmarked. Therefore, due to the similarity with the brooch portion of the diamond hair ornament marked ‘C & AG,’ as well as the other three signed winged pieces also marked ‘C & AG,’ it seems reasonable to conclude that the present piece dates from the era of the sons.

Regarding the design itself, winged brooches set with large central stones were popular in the latter part of the nineteenth century, due in large part to a revival of Ancient Egyptian motifs. This image appears frequently in Ancient Egyptian iconography, though in a highly linear form. The original symbol was composed of a pair of wings extending from a central orb, oftentimes incorporating a pair of serpents, the three elements together representing the holy trinity of Ancient Egyptian gods. The aforementioned winged Giuliano tiara relates strongly to this emblem, with an ovoid star ruby set at the centre of the wings, all supported by twin serpents. Though some European designers stayed true to the authentic linearity in their Ancient Egyptian-inspired jewels—such as the famous jeweller Fortunato Pio Castellani, with whom the senior Giuliano trained--many also freely adapted the format, as was done in these Giuliano pieces, with their angelic, undulating wings. Giuliano also sometimes modified the original symbolism of the form, and attached a completely different meaning to another of their winged jewels. Set with a cabochon sapphire between diamond and enamel wings, this brooch was commissioned as a birthday gift, and, according to an original note, the wings were to represent ‘the flight of time.’ Other jewellers of the period also took up the format, often adapting it with a heart-shaped centre stone, or omitting the central element entirely. Today diamond wing jewellery is still extremely fashionable, as is demonstrated by the popularity of Garrard’s diamond ‘Wing’ collection, a testament to the timeless style of this important antique jewel.

Our showroom in Hatton Garden is now closed for our annual summer break until the 1st September.

However, if you find a special piece during this time and you would like more information, you are welcome to email info@berganza.com and one of our specialists would be delighted to assist.

We are able to ship all orders out during this time, should you purchase a piece in full through the website. Shipping is complimentary and fully insured, and we can ship both within the UK and internationally.