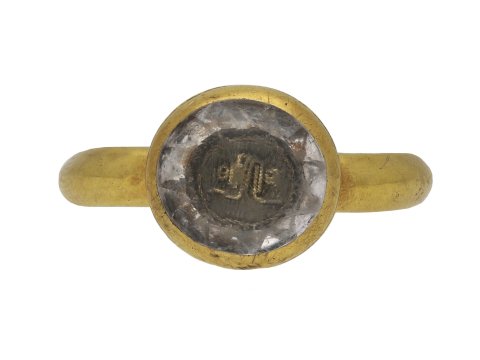 The exciting group of jewellery known as ‘Stuart Crystals' acquired their name from the House of Stuart, and initially were pieces of political jewellery commemorating the death of Charles I. The King was beheaded on a scaffold outside the Banqueting House on Whitehall in 1649 and his supporters, the Royalists, who opposed his execution designed a symbol of defiance against his successors in the form of these delightful ornaments. The first of these jewels incorporated locks of the ‘Martyr King's' hair, then (presumably when supplies of his hair dwindled!) the jewels went on to either display his initials or a portrait miniature of the King himself. However showing support openly could be very dangerous, so these pieces were often worn in secret, on a ribbon, hidden from view under clothing.

Stuart crystal designs were created in three main categories of jewellery: rings, slides strung on a ribbon round the neck as a pendant or threaded on ribbon round the wrist, and earrings. The basic format of these pieces was a faceted rock crystal which would protect and sit atop an underlying portrait or lock of hair, all in a closed back setting.

As the 17th century continued, Stuart rock crystal jewellery evolved and was adapted for a larger audience of people- as memorial jewellery. These pieces often contain fine panels of hair woven to look almost like cloth, along with motifs such as the person's initials in gold threadwork, or minute mourning imagery such as angels, skulls, flowers or doves. Sometimes one can also see black or white enamel work or an engraved passage to reverse of the piece, listing for example the dates of birth and death. These jewels were the precursor to mourning or memorial rings which became the rage in 18th century England.

Stuart crystal jewels have a third use- the rarest of the three and to us at Berganza, the most exciting use- as symbolic betrothal or marriage jewellery. This category of Stuart Crystals display imagery such as cupid holding a bow and arrows, Venus- the goddess of love, or unsurprisingly, hearts. Our exquisite Stuart crystal ring displays an elaborate gold wirework love knot underneath its rose cut rock crystal dome, all set on a simple solid D-shaped shank. It is highly likely that this ring was given as a promise or betrothal ring to a sweetheart around 400 years ago.

These beautiful pieces are attractive, rare and highly collectable. The combination of the faceted rock crystal and the charm of the heart felt memento secured underneath, be it a Royalist memento, mourning symbol or displaying betrothal imagery, it is not surprising that these jewels are so sought after and prized.

At Berganza we only source rings that represent the very best from every period. Discover more of our rare antique engagement rings here. 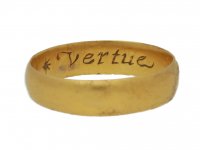 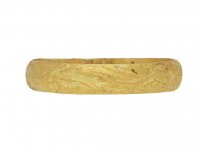