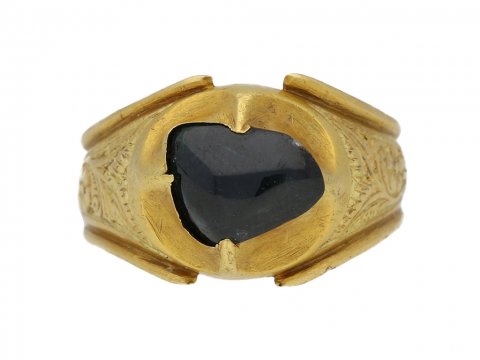 ‘Alas for fayte’ – three short words which immortalise a fourteenth century love affair between John of Gaunt, 1st Duke of Lancaster, and his mistress, Katherine Swynford, inscribed for posterity to the inner band of a sapphire posy ring. Typically a band of gold with a small inscription, beginning in the medieval period, posy rings were exchanged between lovers and friends. Set with a central sapphire cabochon (likely brought to Britain via the Silk Road), and richly ornamented with carved flowers and foliage, the Duchess of Lancaster posy ring is an unparalleled example of medieval jewellery. The main intrigue of the piece however, is the story behind it – the cryptic inscription an ironic comment on an illicit love affair.

One of the richest men of his day and third son to King Edward III of England, John of Gaunt was born in Ghent in 1340. At the age of nineteen, he married his third cousin, Blanche of Lancaster, and was subsequently titled ‘Duke of Lancaster’ following the death of his father-in-law in 1361. In this position, he owned extensive lands across England and France, which earned him a handsome income of between £8,000 and £10,000 a year. Following Blanche’s death in 1369, John married Infanta Constance of Castile and thereafter made an unsuccessful attempt to secure the throne of Castile. This coincided with the arrival of Katherine Swynford, the daughter of an ordinary knight who was employed in the household as a governess. Shortly thereafter, Katherine and John entered in to an extra-marital love-affair that would produce four children.

Whilst his marriages to Blanche and Constance were for monetary gain and political advancement, John of Gaunt’s relationship with Katherine appears to have been for love and he is known to have showered her with gifts and adoration. Having said this, unfavourable public opinion dictated a lifestyle change for John, and the affair was halted at some point in the 1380s. As the saying goes, true love endures, and contrary to the advice of his peers, John married Katherine at Lincoln Cathedral in 1396 – two years after the death of Constance, his second wife. The fourteenth century writer, Thomas Walsingham commenting ‘everyone was amazed at the miracle of this event since the fortune of such a woman in no way matched a magnate of such exalted birth.’  The marriage legitimised Katherine and John’s issue, who thereafter bore the surname ‘Beaufort’. Illustrious descendants of the couple include George Washington, James Monroe, Alfred Lord Tenyson and HRH Elizabeth II.

With Katherine by his side, John of Gaunt died from natural causes at Leicester Castle in 1399. She died some four years later, then in her early fifties.

A rare survival and wonderful example of medieval craftsmanship, the Duchess of Lancaster Posy Ring is one of the highlights of our extensive collection of early rings.