Jacqueline Kennedy: The Life and Jewels of a First Lady 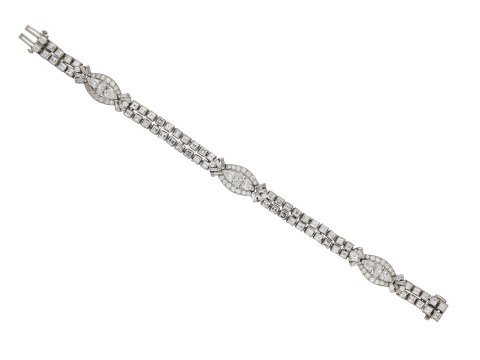 On the 12th of September 1953, Jacqueline Bouvier married Senator John Fitzgerald Kennedy in a sumptuous ceremony in Newport, Rhode Island. The extensive guest list comprised over eight hundred individuals, to include members of the political elite and Hollywood illuminati. Almost sixty-three years to the day, at Berganza we are marking the occasion by highlighting the most iconic pieces of jewellery from Jacqueline Kennedy’s collection.

The couple had met during the summer of 1952, when introduced at a dinner party in Georgetown, Washington. A courtship soon developed between Jacqueline (then twenty-two) and the senator, who was twelve years her senior, culminating in a proposal which was announced in June 1953. The ring, an exquisite emerald and diamond two stone ring by Van Cleef & Arpels, was chosen by Kennedy with the help of his father, Joseph. On their wedding day, Jacqueline wore it alongside a single strand of pearls and an elegant platinum and diamond bracelet which had been gifted to her by the groom. Following a brief honeymoon in Mexico, Jacqueline was catapulted in to the political sphere, accompanying her husband as he campaigned for re-election to senate, and subsequently assisting in his successful presidential campaign of 1960.

The media was enraptured by the new first family, whose youthful, relaxed attitude set them apart from their predecessors and endeared them to the public. The embodiment of elegance, Jacqueline was portrayed as the ideal woman and her fashion choices were frequently chronicled and emulated by the masses. Rarely seen without a pearl necklace, the first lady also favoured brooches and was gifted a Tiffany ruby and diamond two fruit clip by her husband following the birth of their son, John Kennedy Jr. in 1960. To avoid appearing ostentatious, Jacqueline opted for tasteful, classic ensembles by American designer, Oleg Cassini, which she accessorised with diamonds and pearls.

During her time in the White House, Jacqueline Kennedy pioneered an extensive restoration program of the historic home. Dismayed by the profusion of modern furniture throughout the eighteenth-century building, within a month of arriving in the White House she had established a committee of fine art and antique specialists to assist in creating a decorative scheme that would incorporate only the finest of antiques and artworks to showcase the rich artistic history of the United States. As the project neared completion, in 1962 the first official White House guidebook was published, selling over half a million copies in the first ten months. Keen to share her own excitement and knowledge of the past with all Americans, Jacqueline was heavily involved in the publication and even conducted a televised tour of the newly restored rooms, for which she was subsequently awarded an Emmy. Her love and appreciation of the fine and decorative arts was also reflected in the antique jewellery that she frequently wore. One of her most well-known pieces was a nineteenth-century diamond sunburst brooch, which she once memorably wore atop an elegant chignon hairstyle.

In celebration of their ten-year anniversary, in 1963 Mr Kennedy commissioned Van Cleef & Arpels to create an eternity ring set with ten emeralds (each stone representing a year of their marriage), for the first lady to wear alongside her wedding band. His tragic death that same year brought an abrupt end to the Kennedy administration, and left Jacqueline a widow at the age of thirty-four. In the aftermath of her husband’s assassination, there was a worldwide outpouring of grief and admiration for Jacqueline’s courage and dignity. In her role as first lady, Jacqueline Kennedy charmed the public with her understated elegance, style and intelligence, firmly establishing herself as one of the twentieth century’s greatest icons. 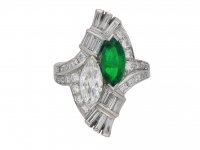 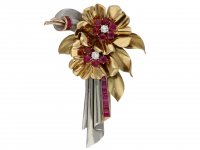 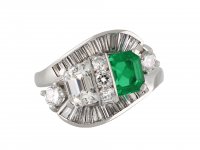