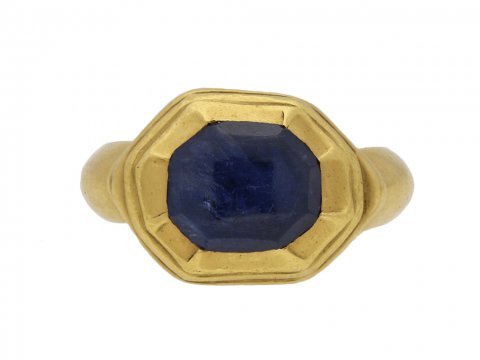 On display at the Victoria & Albert Museum is a mesmerising collection of over 150 objects, jewellery and paintings from the 16th and 17th centuries, shown to highlight the relationship between the British Monarchy of the Tudor and Stuart courts and the Russian Tsars. This exhibition would be of interest to anyone fascinated by hand crafted objects from this period, with some being good enough to be presented as gifts to foreign Royalty. Within this exhibition are three gold finger rings that were made in the 16th - 17th centuries. One is an ancient sapphire intaglio set within an early 17th century ring, another is a memorial / wedding ring circa 1550-1600 and lastly a signet ring circa 1580, all with decorative scrolling shoulders, which are interesting comparisons to some important new additions to our collection. The V&A holds a vast array of important rings from this period and we are lucky to have such pieces of museum quality here at Berganza.

At this time, rubies would have come from both India and Ceylon, and diamonds were rare. By the early fifteenth century diamonds and gemstones were being faceted as this brought out the desired reflective properties that the earlier cabochon cut gemstones just didn't display. Yellow gold would have come from various sources, as it was being imported from the Arab world and European production was increasing, with the first gold producing mine in Europe being at Trenmitz in Bohemia, discovered in the 1320s.

Comparable pieces to this new addition are our earlier medieval amethyst cabochon ring, circa 14th  15th century and the cabochon sapphire ring circa 12th  15th century . This rounded effect of a cabochon was gained by polishing and rubbing the stone, which is seen prior to the early 15th century. The amethyst probably came from Europe, as quartz at this time was found in Germany, France and Switzerland, with amethyst being the purple variety. Sapphires were a popular choice, coming from Ceylon and encircling regions, finding their way to jewellers via trade routes.

Silver was produced mainly in Western Europe and was also gained as a by-product of lead mining around this time. It was considered the second most precious metal to gold and was also used as settings for gemstones.

Rings from the late medieval period that are in fine condition are extremely rare. Those detailed above are fantastic examples of the types of workmanship seen at this time, across different metals and serving different purposes. To own and even wear a medieval piece of such rarity is to own a piece of jewellery history, comparisons of which can be seen on display in museums and in portraits from this time. 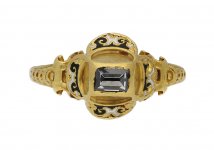 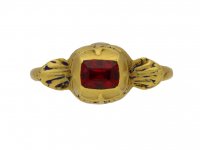 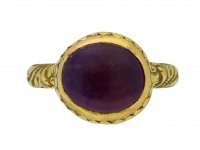