Traditionally eternity rings are a circular band set with a continuous row of gemstones of the same size and, usually, the same cut, symbolising never ending love from the giver. Gem set bands of this type have been known as early as circa 4000 years ago in Ancient Egypt however it was from the early 20th century that the popularity of these fabulous versatile bands really took off.

The precursor to the modern concept of eternity rings was called a ‘keeper’ ring, and was either a single band ring or a pair of matching rings worn on either side of the wedding ring to protect it from damage or loss. Most often keeper rings were plain bands, however around the middle part of the eighteenth century they began to appear set with a single row of matching gemstones.

Eternity bands of the early twentieth century were characterised by hand cut round old cut diamond and platinum designs, often with millegrain settings and foliate engraving along the sides of the band. We have several beautiful examples of this type, for example see reference 19766 or 19360 which is engraved to the sides with a repeating Greek key design. During the 1920-30s colour, though largely restricted to the red, green, and blue of rubies, emeralds, and sapphires respectively, and often paired with platinum and diamonds—all in keeping with the Art Deco taste—became popular. Reference 19867 is an exquisite slim ruby and diamond band from the Art Deco period. Eternity rings from this era also displayed the newly invented step cut gemstones in unadorned channel settings. See reference 13552 which is a striking 1930s channel set diamond baguette cut band. These rings can be chosen for many occasions- in 1954 Marilyn Monroe received a baguette cut diamond eternity band as a combination engagement and wedding ring from Joe DiMaggio, fully throwing open the functionality of such rings.

We have a very varied stock of unique antique and vintage eternity bands, all dating from different periods. Whether you prefer a traditional diamond set dainty or broader band, either a full band or one half set with stones, we have examples that are channel set, 18682, claw set, 18504, or grain set- each showing off hand cut diamonds of differing cuts. The mounts themselves, some with intricate engraved detailing, are hand made by skilled craftsmen and date from a time when jewellery really was made to last. Alternatively we can tempt you with alternative designs, such as our colourful vintage 1960s sapphire and diamond twist ring by renowned American jewellery manufacturer Oscar Heyman Brothers, reference 19080.

Today eternity rings are more popular than ever, with eternity bands being worn as wedding rings with that added bit of sparkle, to commemorate wedding anniversaries, to celebrating the birth of babies, as well as to mark any number of life’s other monumental occasions. Worn singly or stacked up on the finger you can decide on your style. As was perhaps best stated in a 1938 issue of Vogue, “What better emblem of unending devotion than eternity rings?”

Here at Berganza we have a wide array of stunning vintage and antique eternity bands to suit every taste so why not pop in and be tantalised! 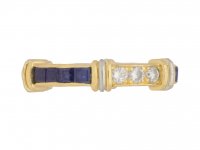