Small boxes fashioned from precious metals and gemstones designed to be carried on the person have been in use in Europe as early as the fourteenth century.  One of the first of these types of objects was the boîtes-de-senteur, or scent box, a necessary item in the age before modern sanitation.  Most typically they were in the form of pierced, hinged, globular receptacles and were made to hold solid perfume.  Also in use around this time were small candy boxes designed to hold sweets, spices or dried fruits, which were made of gold, silver, iron, stone, ivory or wood.  As these cases grew in popularity their decoration became increasingly elaborate, often integrating enamel and gemstones.

In the eighteenth century--perhaps the first of the two golden ages of precious boxes--snuffboxes became highly fashionable, and were used by women and men alike.  In fact, Catherine de Medici is believed to have been one of the first snuffers in Europe, after being given tobacco by Portuguese traders as early as 1559.  Such items became quite socially important, and were often used as diplomatic gifts and for ceremonial purposes. Another type of personal box which came into use for the first time during this century was the cosmetic case.  Decorative techniques and materials became extremely varied, including multi-coloured gold, engine-turned engraving, chasing, enamelling, lacquer and inlay of various materials including hardstones, shell and shagreen.

Toward the end of the eighteenth and into the nineteenth century we see an expansion in the forms of these luxurious cases, or at least new variations, including note cases, which held a pencil and thin ivory tablets for note-taking, and the nécessaire, designed to carry any number of utilitarian items, such as sewing implements.   Perhaps the pinnacle in craftsmanship of such boxes, toward the turn of the century appears the work of the famous Carl Fabergé.  Jeweller to the Russian court, he created some of the most opulent boxes ever produced, perfecting with great virtuosity decorative enamel and hardstone work, many examples of which were used as presentation gifts between foreign dignitaries and royal families.

The twentieth century ushered in a desire for practicality when it came to precious boxes, the two dominant forms being cigarette accessories and cosmetic cases, though they were no less artistically significant.  Louis Cartier, head of the renowned French jewellery house, reflected these sentiments early in the century when he issued the directive, ‘We must make it our business to build up an inventory that responds to the mood of the public by producing articles which have a useful function but which are also decorated in the Cartier style.’ All of the top European and American firms produced lavish cigarette cases, match boxes, powder compacts, lipstick cases and multi-compartmented vanity cases.  Some of the finest and most collectable were made in the Art Deco style, many with decoration inspired by Asia, particularly Indo-Chinese designs, as exoticism was all the rage.  Sadly, after the Second World War interest in such luxury items dwindled.  Today these pieces are highly collectable, a romantic vestige of the elegance of times past. 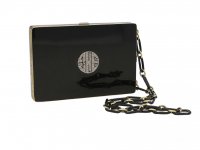 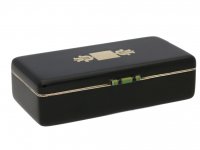 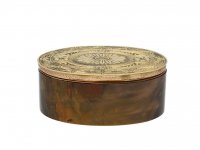