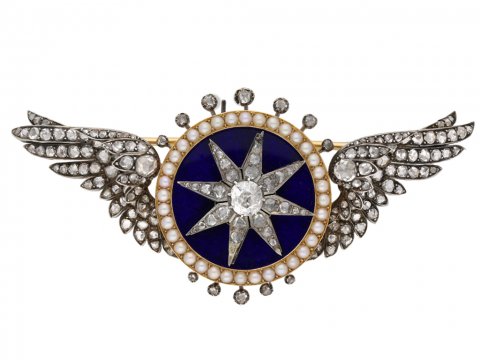 Europe and India share a long and intertwined history with regards to jewellery.  Since ancient times gems from India, most notably diamonds, have been brought westward from the subcontinent, some of the earliest appearing in the jewellery of the Roman Empire.  More recently, the famous French explorer and pioneer gem dealer Jean-Baptiste Tavernier (1608-89) brought important gems, including what is now known as the Hope diamond, to Europe from India and Persia.   Contemporaneously, Spain supplied the royal courts of the Orient with the finest emeralds in the world, sourced from their colonies in the New World, specifically the famous Muzo mines in present-day Colombia.  It was not until the nineteenth century, however, with formal British rule in India, that a relationship to do with jewellery rather than gemstones was solidified between the two leading jewel cultures of the world.

With the establishment of the British Raj in 1858, the wealthiest of India’s maharajas began to visit England, particularly for jewel-laden state occasions such as coronations and jubilees.  It is hardly surprising then that these foreign royals, being from a historically jewel-centric culture, began to purchase European jewels, and also to appoint the major Western makers to reset gems from their own pre-existing collections.  Some of the earliest commissions by the maharajas from European jewelers commenced in the 1870s;  one of the first recorded was a purchase of earrings by Raja Rajaram of Kolhapur (r. 1866-70) from Hunt and Roskell’s on Bond Street in London.  The other leading British jewelers, with Garrard paramount among them, were also favoured early on by the Indian princes, soon followed by the French houses of Cartier, Boucheron, Mauboussin and Chaumet.

Garrard, the premier British firm at this time due to its status as the Crown Jewellers, was a particular favorite with the maharajas, with space devoted exclusively to an ‘Indian, Colonial and Country Department’ in their London store.  They were also one of the few Western jewellers to open a branch in India--in Calcutta--instead of relying solely on travelling representatives.  The majority of commissions were for traditional Indian forms executed with Western techniques.  Sarpeches, or turban ornaments, vanki, or rigid armlets, and ceremonial bib necklaces were among the most popular orders.  However, instead of the traditional Indian methods of setting flat, carved or cabochon cut stones in closed gold settings, the European-made Indian forms featured brilliant-cut gems in the delicate open silver-topped gold mounts characteristic of European jewels.

A remarkable example in every respect of one of these Western-made Indian forms, the present piece is a sarpech, and was likely made by Garrard for the Maharaja of Indore.  The jewel is composed of a pair of outstretched diamond-set wings centred with a deep circular case surrounded by a border of pearls around a deep blue enamel ground, overlaid with two diamond-set stars which, when wound, spin in opposite directions.  The form—a winged orb, in this case probably meant to be a stylized sun—was an ancient Indo-Persian symbol of divinity and royalty, and thus befitting of a maharaja.  The certainty of its function as a sarpech is further evidenced by a highly similar piece worn in a photograph of Maharaja Umaid Singh of Jodhpur (r. 1918-47), taken circa 1920.

This photograph also provides evidence that the ornament was made by Garrard, based on its similarity in combination with the fact that Maharaja Singh was a known Garrard customer.   Like the present piece, Singh’s sarpech is also composed of a pair of diamond wings flanking a central circular element surrounded by a single border of pearls, and though the exact decoration of the centre is obscured, it would seem likely that it also contains a spinning mechanism.  Umaid Singh was apparently courted by Garrard’s foreign sales agent, who made three trips to the maharaja regarding turban ornaments.

Another piece of evidence to suggest that this piece was made by Garrard comes in the form of a first-hand account of such unusual mechanized items in the memoirs of the Marchioness of Dufferin and Ava, wherein she recounts a trip made on the 29th of January 1885 to an important jewellers in Calcutta, which could have only been either Garrard or Hamilton’s.  She mentions this specific type of jewel among the other wares created by the firm for Indian tastes:

The jewels set in Europe for the Eastern market are a curious mixture of splendour and childishness....There are ornaments for turbans, on which the diamond flowers, being wound up, whirl round and round till you can no longer see their shape. It would be difficult to keep up an argument with a man whose jewels were behaving in such an eccentric manner!

The provenance of the piece becomes the next alluring question.  According to Indian custom, turban ornaments were only worn by the most elite--either by the maharaja or another important person in the royal court.  It is believed that the piece was formerly in the collection of the maharajas of Indore, one of the greatest of the jewellery collecting Indian families, and was last owned by Maharaja Yeshwant Rao Holkar II (r. 1926-48). If indeed the ornament came from this family, it would have most likely been made during the reign of his father, Tukoji Rao Holkar II (r. 1903-1926), a known customer of Garrard’s, as recorded in their purchase ledgers.  Though the order for this piece was not found (the collection of ledgers being incomplete), they do reveal that the Maharani of Indore made purchases from the London branch in July and October of 1911, and so too very likely her husband.

The one mark on the jewel—the crown on the reverse of the case, next to the winding mechanism—offers additional clues as to the provenance as well as date of manufacture.  The crown itself bears a strong resemblance to the Imperial Crown of India, made by Garrard for a Delhi Durbar,  a celebration of King George V’s coronation as King of Great Britain and Emperor of India in December 1911.  The Imperial Crown was created for the ceremonies by the crown jewelers because by Old Royal Law the British Crown Jewels were not permitted to leave the United Kingdom.  After the ceremony, which was attended by all of the most distinguished figures in Indian society, the crown was on view at Garrard’s Calcutta outlet, by appointment only.  The Maharaja of Indore attended the ceremony, and proudly displayed his Delhi Durbar Medal, given to attendees of the event, in a portrait photograph taken at the Lafayette Studio on New Bond Street, London in 1913, a photographer popular with the royals of India.  Thus, one possible explanation is that the mark was added to the piece in India to commemorate either the Durbar or a visit to the crown itself, thereby dating it (or the mark, at least) circa 1911.

Regarding the date of manufacture, in addition to the above factors, both the style and materials support this conclusion.  Firstly, the use of both engine-turned enamel and diamond-set wing motifs were popular in from about 1885 to 1915, the latter particularly in England, with numerous examples from this period by Child & Child and Giuliano, both London-based firms.  Furthermore, silver topped gold would have been consistent with European jewellery made for the Indian market at this time, though not for jewels for the domestic market.  In Europe platinum quickly superseded the use of silver and gold shortly after it was introduced at the turn of the century.  In India, however, there was still a preference for gold based on traditional Indian jewellery design, even if topped in silver.  With regards to the aforementioned relationship between Garrard and Maharaja Umaid Singh, the agent recorded: ‘He is afraid he will be seen as a silver prince and not a gold one,’ when posed with the prospect of having his jewellery made in platinum.   And so it was not until the 1920s that platinum was the metal of choice for Indian commissions.  Drawing again on the photograph of Singh which dates circa 1920, jewellery of this type was clearly still fashionable in the Indian market in the second decade of the twentieth century, whereas it would have been already out of date in European circles by 1910.