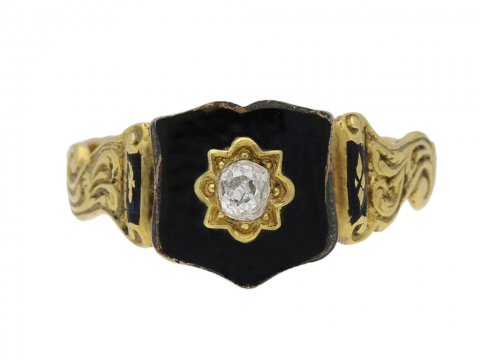 The ghosts of all things past parade,
Emerging from the mist and shade
That hid them from our gaze,
And, full of song and ringing mirth,
In one glad moment of rebirth,
And again they walk the ways of earth
As in the ancient days.

The beacon light shines on the hill,
The will-o'-wisps the forests fill
With flashes filched from noon;
And witches on their broomsticks spry
Speed here and yonder in the sky,
And lift their strident voices high
Unto the Hunter's Moon.

The air resounds with tuneful notes
From myriads of straining throats,
All hailing Folly Queen;
So join the swelling choral throng,
Forget your sorrow and your wrong,
In one glad hour of joyous song
To honor Hallowe'en!

Halloween, Hallowe’en or All Hallow’s Eve, the celebration we now know as Halloween has its roots in the Celtic festival of Samhain, one of the four Druid ‘Bonfire’ festivals. Traditionally celebrated on the 1st of November, to mark the midway point between the Autumn and Winter Solstices, it was believed that it marked the end of the old year and start of the new. Samhain (pronounced sów-en)  was a term meaning “The End of Summer” marking the time that harvests were brought in and preparations for winter were made. These included the settling of old debts and burying the newly departed before the coming winter.

The Celts were highly superstitious, believing that at this time of year the veil between this world and the next was especially thin, allowing spirits to roam, as ‘a new year was being stitched to the old’. Because of these beliefs, October 31st became a highly superstitious night. As a night of vigil, the 31st was a “Hallowed Evening”, shortened to Hallowe’en and then Halloween. Towards the end of the evening priests and townsfolk would dress up as spirits and wander through their village in order to lead any visiting ghosts back to their proper resting places.

From at least the sixteenth-century, a tradition arose whereby jewels and other trinkets were commissioned in memory of a deceased family member which were known by the Latin phrase Memento Mori, translating as ‘remember that you must die’. These beautifully crafted pieces reflect a different time when death was very much a way of life. Memorial jewellery acted as a visual reminder of loved ones passed and prompted the wearer to live for the moment as life could be short. These Memento Mori typically featured skulls, urns and other symbols of death, often inscribed with the names and dates of the deceased. In many instances, hair from the deceased was carefully woven into these designs, either centrally set or hidden underneath the bezel.

Continuing into the eighteenth century, these styles remained popular, especially the decorative use of hair. Popular motifs included weeping willow trees, harps, urns and wheat sheaves. Skulls were always a popular design in memento mori jewellery, along with coffins and in some cases a complete skeleton. These could be depicted on the outside or inside of bands. Black and dark shades of enamel were often used, sometimes combined with dark gemstones. White enamel featured if the deceased was unmarried. At this time, the inscriptions were typically the name, the date of death and the age of the deceased.

Fascinated by the old traditions from yesteryear? Available at Berganza this All Hallow’s Eve is a fascinating range of memorial and memento mori jewellery from the early 18th century to late 19th century. 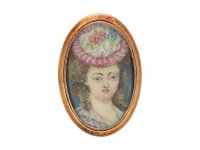 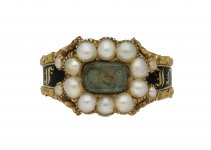 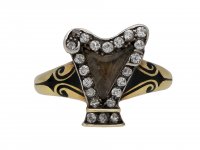