London—one of the leading centres in the international jewellery trade—has a long and illustrious history with the craft of jewellery making.

The earliest centralized location for jewellers in London was found, unsurprisingly, in the oldest part of the metropolis, more commonly known as ‘The City’.  The Goldsmiths’ Company, the organization responsible for regulating the trade of precious metals (its importance among the other guilds demonstrated by its status as one of the Twelve Great Livery Companies of the City of London, out of over one hundred such trade groups), received its first royal charter in 1327.   Goldsmiths’ Hall is still located in this area of London, at the junction of Foster Lane and Gresham Street, where it has stood in various architectural incarnations since 1339.  Not coincidentally, two blocks south was and still is Cheapside, a street running more or less East-West across the centre of the City, which was home to ‘Goldsmith’s Row’, more specifically on the section between Wood and Bread Streets.  The number of jewellers during this early part of London’s jewellery history was remarkable even when compared to the major cities of continental Europe, as noted by the Venetian Ambassador upon his 1498 visit to London:  ‘Fifty-two goldsmiths shops so rich and full of silver vessels, great and small, that in all the shops in Milan, Rome, Venice, and Florence put together [I do not think would] be found so many of the magnificence that are to be seen in London’.

We are also fortunate to have an extraordinarily rare survival of jewellery from one of these shops about 100 years after this account, known as the ‘Cheapside Hoard’, attesting to London’s continued importance in the world jewellery market.  This amazing discovery is a cache of over 500 Elizabethan and Jacobean pieces of jewellery and loose gemstones which in 1912 was rediscovered in the cellar at 30-32 Cheapside. The find includes emeralds from Colombia, garnets from India and turquoise from Persia, a testament to the global significance of the London gemstone market.

London’s importance in the gem trade in particular was solidified in 1655 when the private diamond trade in England was legalized, which marked the commencement of London’s uninterrupted dominance in the world distribution of rough diamonds.  The next legislative advantage for the London gemstone industry came in 1732, when customs duties on diamonds and precious stones were abolished by an Act of Parliament, with the following decree:  ‘Whereas this Kingdom is now become the great mart for diamonds and other precious stones and jewels, from whence most foreign countries are supplied….’  Around this time, craftsmen involved in the jewellery trade began to establish themselves in a new part of London—just north of the City walls, in Clerkenwell—in order to avoid the restrictive regulations of the guild.  Jewellers would continue to base their production in this area well into the early twentieth century.

Slowly both sales and production moved westward, towards Farringdon, Ludgate Hill and Hatton Garden.  The firm of Rundle and Bridge, which held the title of Crown Jewellers, in 1788 was established a 32 Ludgate Hill.  Garrard, next to follow in the chronology of royal jewellers, was first established in 1722 on Threadneedle Street, east of Cheapside, but by 1735 had moved their premises as far west as Panton Street, off Haymarket, in the West End.  Hatton Garden, however, was to become the preeminent jewellery centre within London, which it remains to this day with the largest number of jewellers in one area in the whole of the United Kingdom.

The nineteenth century brought a new and expanding middle class, who vastly expanded the market for luxury goods, including jewellery.  This demand provided the impetus for jewellers to expand westward from Clerkenwell and Farringdon, into the area known as Hatton Garden, which bears the name of one-time resident Sir Christopher Hatton, Lord Chancellor and favourite of Queen Elizabeth I.  It was not, however, until the 1870s that Hatton Garden became firmly established as the jewellery centre of London, in large part due to the South African diamond rush, and the involvement of two pioneering Englishmen.  By the 1880s Cecil Rhodes and Barney Barnato, both of whom held offices in Hatton Garden, gained sole control of the mines, the output of which was controlled by The London Diamond Syndicate based in Hatton Garden, later to become the colossus De Beers Consolidated Mines.  Since divided into various corporations, the arm which now handles the valuing and distribution of an estimated seventy-five percent of the world’s rough diamonds by value, today called the Diamond Trading Company, is still based just off Hatton Garden.

By 1930 three hundred and sixty jewellery businesses were listed in Hatton Garden, in contrast to the thirteen of almost a century earlier, a number which has been surpassed in the present day.  The area remains the centre of jewellery in the United Kingdom.  As a testament to its continued importance in 2006 the Goldsmiths’ Company opened its first off-site hallmarking facility in modern times in the neighbourhood.  Furthermore, with an increased appreciation for the decorative arts, over the past century London has also become the centre for the scholarship of antique jewellery.  The world’s finest collections of antique jewellery are found throughout the city, including those of the British Museum, the Museum of London, and, last but not least, the Victoria and Albert Museum, which recently opened the William & Judith Bollinger gallery to showcase their spectacular collection of antique jewels, many of which were made in London.  This interest is mirrored by the finest dealers of antique jewellery in the world being based in London, primarily in Bond Street and, of course, Hatton Garden.

Celebrate London’s history of excellent in the jewellery trade by attending London Jewellery Week, with events running from the sixth through the twelfth of June.  For more information visit: http://www.londonjewelleryweek.co.uk/ 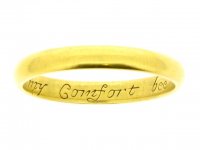 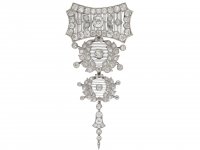 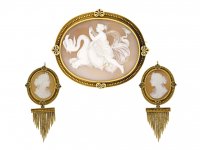 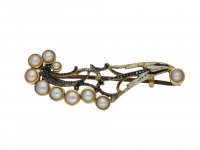 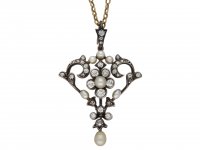