The wedding season will soon be upon us

With summer rapidly approaching, the wedding season will soon be upon us. With this in mind, we have compiled a collection of some of our favourite pieces of jewellery to compliment your wedding day attire.

We all know the familiar tale ‘Something old, something new, something borrowed, something blue’ and this is very often interpreted into jewellery, one of these usually being a piece of jewellery worn by the bride on the day. ‘Something old’ is said to represent the bride's link to her family and the past, while ‘something new’ represents good fortune and success in the future. A great way to interpret this is into a new piece of antique or vintage jewellery, which can be passed on for generations to come. The Hanoverian Tiara for example, made in 1919, was given to Queen Mary as a wedding gift from Queen Victoria, and went on to be worn as the ‘something borrowed’ for the weddings of Queen Elizabeth and Princess Anne.

‘Something borrowed’ usually comes from a happily married woman and is thought to lend some of her good fortune and joy to the new bride. The Duchess of Cambridge wore on her wedding day a diamond tiara, which was given to the Queen on her 18th birthday by the Queen Mother, and diamond earrings gifted by her parents.

The "something blue" in a bridal ensemble symbolizes purity, fidelity, and love and often a sapphire is chosen for its intense blue colour. In the symbolic language of jewels, a sapphire represents marital happiness. An aquamarine can also be chosen to represent marital harmony and is said to ensure a long and happy marriage.

Queen Victoria, known for her lead in fashion, decided on a white dress which she wore with a grand diamond necklace with matching earrings, and a sapphire brooch given to her by Prince Albert. In the Victorian era, etiquette dictated that diamonds were not to be worn by girls until they were married, so thus diamond jewellery was a very important part of the bridal attire. It is also a very symbolic stone, representing unity, eternity and constancy.

Pearls endure as a classic of bridal jewellery. The Ancient Greeks thought that they were the tears of the gods and believed that wearing pearls would prevent the bride from crying during the marriage ceremony. In the Hindu tradition, it is said that Vishnu plucked the first pearl from the ocean and gifted it to his daughter Pandaia on her wedding day as a symbol of love, union and purity. When Lady Elizabeth Bowes-Lyon, who later became the queen mother, married the Duke of York in 1923, she wore a very elegant drop-waisted dress with a two strand pearl necklace – which would later be worn by Queen Elizabeth II at her wedding in 1947. Jacqueline Kennedy had a similar affinity for pearls, and she wore a single strand of them at her wedding to John F. Kennedy in 1953.

Increasingly couples have taken to presenting each other with gifts on the morning of their wedding. For brides seeking something different for their groom, cufflinks and tie pins serve as a wonderful way of marking the occasion and can be worn on the day and for many years to come. At Berganza, we have a wonderful collection of antique and vintage dress sets, cufflinks and tiepins to appeal to a wide variety of individual tastes.

Mike Todd, when presenting Elizabeth Taylor with a diamond tiara in 1957, proclaimed ‘you’re my queen, and I think you should have a tiara’ – historically, tiaras and head ornaments would have been given by the groom to his bride as a hugely romantic gesture epitomising majesty and devotion. Whilst tiaras continue to play an important role in bridal attire, necklaces, bracelets and earrings also make beautiful, lasting gifts to celebrate one’s special day. 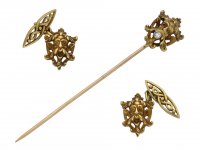 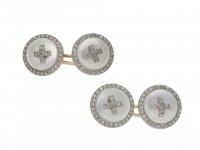 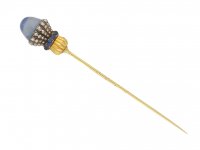